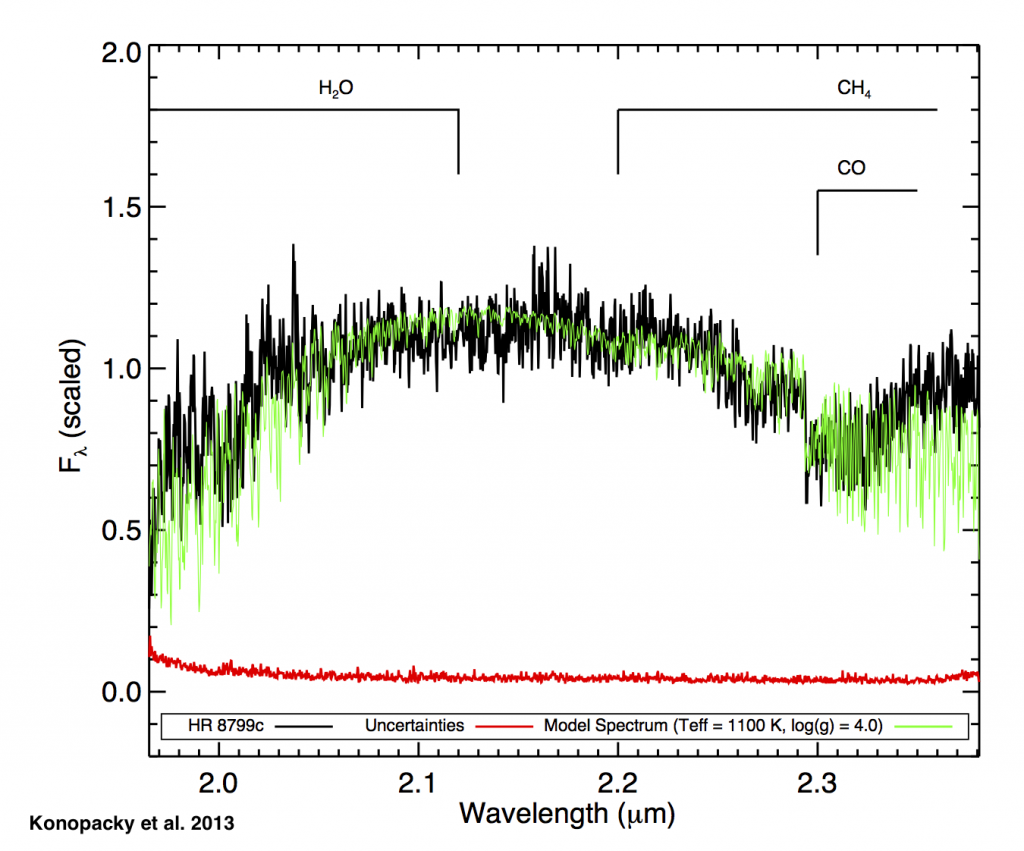 Direct imaging is a technique in which the light from an exoplanet is seen directly, separated from its host star.  This technique relies on having high spatial resolution, and has primarily been undertaken with large, ground based telescopes equipped with adaptive optics systems.  Because we can measure the planet emission directly, we have the opportunity to study their properties in great detail.  My group has been working on detailed studies of the orbits and atmospheres of directly imaged giant planets, primarily using the Keck telescopes in Hawaii.  With direct imaging, we can obtain moderate resolution spectroscopy of the planets (image to the left) and see molecular lines from species like water, carbon monoxide and methane.  We also use imaging to obtain precise astrometry, or the positions of planets relative to the star, to estimate their orbital properties.  Our goal is to use all of this information to learn more about how these planets form.

I am a member of the team who helped commission the Gemini Planet Imager, which is now installed and operational on the Gemini South Telescope on Cerro Pachon, Chile.  Currently, a large international team is conducting a survey of 600 young, nearby stars in order to hunt for new, gas giant exoplanets via direct imaging.  This survey, called the Gemini Planet Imager Exoplanet Survey (GPIES) is about half way through and has yielded many exciting results.  For example, we recently discovered a substellar companion to the nearby debris disk host star, HR 2562B (image to the right).  This companion orbits interior to the debris disk (dashed lines), which may be a sign that it formed in the disk like a planet in spite of having a fairly high mass.  My group has been contributing to the survey, with a focus on the astrometric calibration of the instrument. 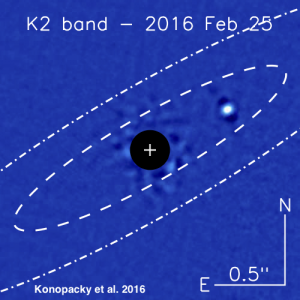 My group works on multiple areas of star formation and evolution using high angular resolution techniques.  We have been working to measure the orbits of various sets of binaries, including those in nearby star forming regions and those of very low mass in the general field population (movie to the left).  The goal of this work is to measure their masses empirically, which allows us to constrain models of their evolution.  We also have a program to look at the kinematics in the inner core of the Orion Nebula Cluster.  Using adaptive optics, we can measure the motions of the stars in the inner core of the cluster around the Trapezium with both imaging and high resolution spectroscopy.  The goal of this work is to look for any signatures in the motions of the stars that are a function of mass, which may tell us something about how the lowest mass stars form.

Theme by Anders Noren — Up ↑